Unique and inimitable wines from the heart of the Collio area: the style of a great wine artisan 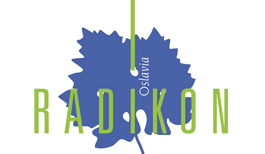 The Radikon winery is an important point of reference in Friuli, and over the decades has become an example for many to follow. It was one of the first wineries to develop a unique and uncompromising style, closely linked to the oldest traditions of the area, including spontaneous fermentation, prolonged maceration even of white grapes, very long ageing and minimal or no addition of sulphur dioxide. It is located on the hill of Oslavia, a district of Gorizia, in the heart of the Collio, on the border with Slovenia. It has been run since the end of the 1970s by the charismatic winemaker Stanislao Radikon, known as Stanko, together with his wife Suzana, while today it is in the hands of his son, the enologist Sasa. The 12 hectares of vineyards in the vicinity of the winery are situated on steeply sloping hillsides and are therefore very difficult to work, but the soil is perfect for growing grapes, as it consists of sandstone and marl layers of ecocene origin, which in this area is called Ponka. The grapes grown are typical of the area, including Ribolla Gialla, Friulano, Malvasia Istriana and Pinot Grigio, along with traditional varieties such as Chardonnay and Merlot.

The history of the Radikon winery began in 1977 when Stanko took over the cultivation of vines on his father's land. He was young and fascinated by novelties: "I too entered the circle of hell of those who made liberal use of chemicals in the countryside", but as time went by he realised that his wine was not what he wanted because it was ordinary, always the same and similar to all the others. So he decided to radically change course: no more chemical products in the vineyard, nor sulphur dioxide in the cellar, where he switched to long maceration on the skins in wooden vats. The results are surprising: the wine obtained is marvellous, complex and multiform, rich in character and personality. He then began to become the spokesman for a production philosophy that upholds the absolute necessity of cultivating the land using traditional methods without polluting it with chemicals in order to be the creator of a genuine and strictly territorial production: "our intentions for the future are animated by the same spirit that now drives us to produce natural wines, working hard to give the best of ourselves year after year".

Radikon wines are the pure and unconventional expression of the Collio area: unique and inimitable labels that cannot be compared to any other product and are different in every vintage, capable of surprising instantly and giving great emotions over time. They require patience, attention and great dedication, and are not recommended for less experienced tasters. Starting with the typical local grape varieties, Radikon, as a great wine craftsman, has been able to establish an original and highly personal style that has been both innovative and traditional at the same time, paving the way, with his orange wines, for many other artisan producers and making a definitive mark on the enological history of Friuli Venezia Giulia.