A great story of wine, love and passion for their land, the Friuli region. 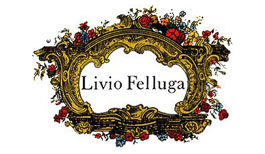 Livio Felluga is regarded worldwide as a landmark of Friulian and Italian enology, famous for the extraordinary quality of the wines he produces, immortalised by labels representing the ancient map of his estates. Livio's winemaking adventure began after World War II, when he finally managed to realise his dream and buy some vineyards in the area around Rosazzo, in the province of Udine, in the Colli Orientali del Friuli area, which later became famous and prestigious thanks to him. His family had always been involved in the world of wine and produced Refosco and Malvasia on the island of Istria, now in Slovenian territory. In the 1950s Livio was one of the first producers to make a decisive qualitative improvement in production, which would establish him as the patriarch and pioneer of a modern and rigorous Friulian viticulture. In 1956 the first bottlings were made, which immediately established themselves as the excellence of the territory. His sons then continued their father's work, elevating the family business to the standard-bearer of the region.

Thanks to the work of the Livio Felluga winery and other brilliant producers who have followed his example, Rosazzo has now become a major centre of Italian wine, known for the production of whites and reds from indigenous and international grapes, such as Sauvignon and Chardonnay. The winery's vineyards extend over 155 hectares on gentle terraces in the Colli Orientali and Collio areas and are mostly within the Rosazzo DOCG area. Very often the grapes are blended during vinification to increase the quality and territoriality of the wines produced. This gives rise to great benchmarks such as the red Sossò or Terre Alte, one of the most representative and award-winning white wines of Friuli Venezia Giulia, known throughout the world.

Livio Felluga wines are produced every year according to a philosophy based on the values of respect and passion for the land, in accordance with the timeless lessons of the founder. In every bottle produced, it is possible to find the qualities that have made the expressions of Friuli great: balance, smoothness, elegance, pleasantness, harmony and lots of fruit. These are wines that have made the history of Friuli and that continue to excite and impose themselves as an essential point of reference both in Italy and abroad.