The artist of distillation, creator of quality grappa 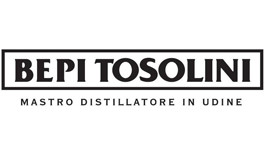 The Bepi Tosolini distillery in the Friuli region represents a guarantee for distillates of absolute excellence. A master distiller of great experience, Bepi Tosolini was also a visionary and enterprising spirit. As a great connoisseur of grappa, he was the first to understand its great potential and the possibility of transforming a popular distillate, which was often rather rough and unpleasant, into a high quality product, equal to the most famous and prestigious European and Caribbean distillates. He changed the character and destiny of grappa and brandy, creating a series of labels that quickly caught the attention of enthusiasts and connoisseurs, thanks to their impeccable technical execution and their unparalleled finesse and elegance.

It all began in 1943, when Bepi Tosolini began his activity as a distiller, with the objective of achieving the highest quality. His grappas were surprising and introduced the public to a new side of the distillate. On the wave of success, in the 1950s he built a new distillery in the city of Udine, with a large cellar dedicated entirely to grappa. In order to produce increasingly refined distillations, he had steam stills built that are operated manually, allowing absolute control over the entire process and guaranteeing unbeatable finesse. This resulted in distillates of exceptional quality, with delicate aromas and fragrant, intense flavours. In order to increase the purity of the grappa, he decided to replace the oak casks with ashwood, which leaves the grappa white and preserves its finesse, without weighing it down with hints of wood.

At the base of great distillates is a quality raw material. The presence of many cellars in the vicinity of the distillery allows Bepi Tosolini to count on excellent grape must for the brandy and fresh, fragrant pomace for the grappa, which comes from producers in the Collio, Colli Orientali and Grave del Friuli denominations. Thanks to this network of consolidated collaborations with important wine producers, Tosolini can produce grappa and brandy from red and white grapes, from blends or even from single grape varieties. In 1973, the new distillery was established in Povoletto, which housed the traditional steam stills, the new bain-marie stills and a Charentais still. Despite its large size, the distillery has managed to preserve its ancient artisan character, allowing it to continue producing elegant, genuine and authentic labels.