The gold of Valdobbiadene shaped by a great Prosecco brand 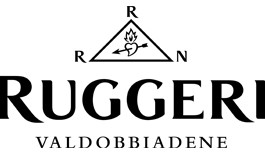 The Ruggeri winery is one of the greatest landmarks in the world of Prosecco, thanks to a continuous quest for quality that began in 1950 thanks to the efforts of Giustino Bisol, who today is almost a hundred years old. Giustino has the merit of personally guiding the growth of the quality and prestige of Prosecco di Valdobbiadene throughout the world, bringing the name of Ruggeri into the inner circle of the great Italian wine producers. Of his more than 70 years in the wine business, he says: "they flew by in a flash, because I have always loved my work intensely".

Today the Ruggeri winery is run by Paolo Bisol together with his children Giustino and Isabella, who are committed to producing top quality Prosecco bubblies from 17 hectares of their own vineyards and from grapes grown by 110 small growers in the best areas of Valdobbiadene. The Bisol family's vineyards are laid out in small plots of land with slopes that are so steep that they require strictly manual harvesting and training operations, resulting in what has been called heroic viticulture in Valdobbiadene.

Giall'Oro, Cartizze, Vecchie Viti and, above all, Giustino B. are the names of the most famous and prestigious Prosecco Ruggeri, considered to be among the finest examples of the entire Valdobbiadene area. These are sparkling wines with an ageing potential that is unprecedented in the Prosecco world and out of the ordinary. This is the result of a quality that has never been absent over the course of more than half a century of history and which has contributed to consolidating the fame and fortune of the Ruggeri winery and that of Italian sparkling wines.

"To have a wide range of wines and not miss a beat demonstrates a remarkable level of professionalism."

The Prosecco of Ruggeri